Out of the top 10 sectors, technology and communication remained the leading trading sector on the PSX during the last 10 months, according to a study conducted by WealthPK.

During the last 10 months, a total of 10 sectors with 14 stocks marked name in the list of PSX Top 5 chart. Based on the percentage increase in the trade volume, the leading companies were Worldcall Telecom Limited (WTL) and K-Electric Limited (KEL). The WTL and KEL amplified the trade volume by 338% and 123% respectively over the period under review.

Technology and communication sector dominated the PSX with four highest traded stocks from Jan 22 to Oct 22. The Worldcall Telecom Limited (WTL), the leading symbol, experienced the overall volume gain of 338%. The WTL has been ranking in the PSX top 5 symbols since Jan 22 except the one odd month of July 22.

The Telecard Limited (TELE) lost a trading volume of 26% between Jan 22 and Oct 22. However, it positioned itself as one of the Top 5 traded symbols from Jan 22 to May 22, consecutively.

With two highest trading stocks, the refinery sector is the second leading sector on the PSX. Pakistan Refinery Limited (PRL) reported a volume gain of 29% from Jan-Oct 2022. The company made it to the list of Top 5 symbols thrice for May, June and August 2022.

The second top symbol under the refinery sector is CNERGY. Cnergyico PK Limited experienced volume loss of 32% but was reported in the Top 5 trading chart for seven months between January and October 2022.

Another victorious symbol is K-Electric Limited. The KEL has shown a massive volume gain of 123% since Jan 22 till now. The KEL positioned the Top 5 symbol chart for six months of the current year. 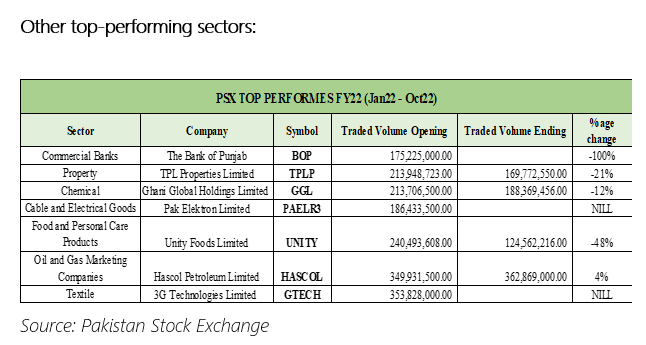 The other top-performing sectors include the oil and gas marketing companies with a 4% volume gain in HASCOL.

TPLP from the property sector and GGL from the chemical sector also made it to the Top 5 chart from Jan 22 to Oct 22.

PAELR3 from the Cable and Electrical Goods and UNITY represented the food and personal care product sector in the list of the PSX leading sector.

The Bank of Punjab is the only one in the top 5 players among the commercial banks. The bank joined the Top 5 symbols chart on Feb 22.

GTECH G3 Technologies Limited joined the Top 5 symbols group of PSX on Oct 22. Followed by a successful merger, GTECH stocks have not been more open for trade since Nov 2, 2022.