Recycling, especially of old clothes and garment factory cut-outs, has become a productive business worldwide. It is a new environment-friendly business and a job creator. The old clothes and cut-outs not only get a new life but also cut short the production cost of virgin cotton. 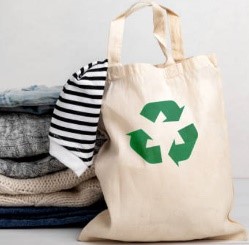 Talking to WealthPK, Said Muzammil Bajwa, who runs a small cloth waste industrial unit in Satiana, Faisalabad, said he has been doing this business for the last 25 years. He said recycling is a profitable business, but to make it more efficient, it is important to make it easy for people to import low-cost machinery from abroad. He emphasized the mechanization of turning garments and all types of cloth waste to save time and energy.

‘’Recycling old/waste cloth is not only important to make the environment clean but it is also a sustainable income source for a lot of households. I have shifted some processing from manual to mechanized system. I imported three finishing machines from China which turn the rags into fine cotton. I could only afford three machines due to the high customs clearance charges other than its price,’’ he said.

Muzammil said he has 28 ditches having the capacity to soak 500kgs of cloth waste to bleach the colour. Jeans type hard stuff takes 5-6 days and hosiery or regular type of cloth takes at least two days to bleach. When they become colourless, they are fully dried. The entire process is done manually. After this, the entire stuff is cut into mall shreds which are ready to turn into fine cotton of good strength.

Muzammil said machines process at least 7,500 to 8,000kgs of shreds into fine cotton in an eight-hour shift. It is further pressed into bales of 80 to 85kg. These bales are then sold to the spinning units and the recycled rags are again turned into a fine textile material.

He added that more than 100 cloth waste recycling factories are operating in different areas and a large number of entrepreneurs and laborers are attached to this business. ‘’The government should focus on facilitating such types of productive recycling units. They must be facilitated to import machinery by paying a too-low custom clearance rate,’’ Muzammil said.

It is estimated that about 20% of water is polluted by the textile and garment industries. The recycling of such material uses 99% less water than the production from fresh/raw material and results in less release of CO₂. Every piece of wasted clothing has decayed as a landfill for centuries emitting greenhouse gases that add to global warming. Recycling however not only saves the environment but also creates a new economic cycle for a sustainable livelihood.

The global market of recycled textile waste was valued at more than US$5 billion in 2022 and is projected to grow by about US$8 billion by the year 2030. Pakistan’s economy is already in the development stage and a lot of people are jobless. The development of productive recycling units will add more value to the already existing labour-intensive business platforms. The government should appreciate and train the people at the skill centres in order to involve them in innovative working as entrepreneurs and co-workers.