The week commenced on a positive note as the market was up 531.1 points on Monday following the release of the Sensitive Price Index (SPI) number on the last working day, which was 8.8% down on week-on-week basis.

The market reacted positively to the change in the Finance Ministry at the highest level. The Pakistani rupee started gaining strength against the greenback, closing at 228.45.

The Asian Development Bank (ADB) also promised to provide $2 billion to Pakistan. However, the market sentiment became negative towards the end of the week as the State Bank of Pakistan (SBP) reserves declined by 4% on week-on-week basis, clocking-in at $8 billion.

Yields on the government’s international bonds, maturing in 2022 and 2024, increased during the week by 20 to 24 frames per second (pps) on week-on-week basis. The market sentiments were further dented as Habib Bank Limited came under international scrutiny for allegedly providing support to terrorists. Albeit, the market closed at 41,128.67 points, gaining 508.46 points.

In response to further clarity on political grounds, the Pakistan Stock Exchange (PSX) remained in the green and maintained its upward trend from its previous close. The benchmark KSE-100 index recovered 531 points on September 26, closing at 41,151.54 points against 40,620.21 points of the previous day.

On Wednesday, PSX opened in the positive zone, but investors decided to take profits as political noise built over the last hour of the session. As a result, the KSE-100 finished the day with a decrease of 83.1 points to close at 41,435.13 points.

The KSE-100 index decreased by 1.02% on Thursday as weakening economic cues dented sentiment and investors chose to remain on the sideline. The imposition of secondary liabilities on HBL in a terror financing case also added to downside pressure on the market. As a result, the KSE-100 index finished the day with a decrease of 421.27 points and closed at 41,013.86 points.

The 100-index of the Pakistan Stock Exchange witnessed a bullish trend as the rupee continued to recover for the sixth consecutive session on September 30, gaining Rs1.18 against the dollar in the interbank market. 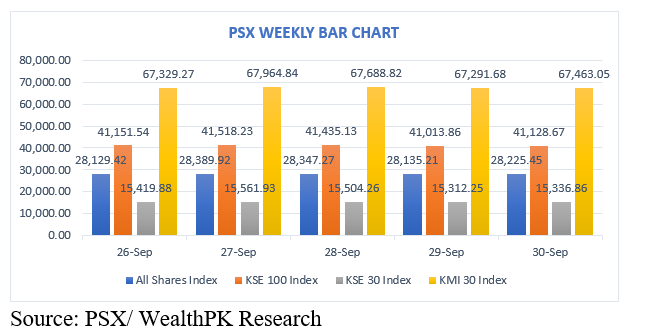 By selling its shares last week, the Foreign Investors Portfolio Investment (FIPI) made a profit of up to $0.15 million. Mutual Funds made the most money this week by selling their shares for $7.58 million, followed by foreign individuals with $ 6.51 million and insurance companies with $3.93 million.

Muhammad Irfan, a financial analyst with Arif Habib Limited, said that with the results season almost over, the market was expected to remain range-bound next week.