The property sector recently launched by the Pakistan Stock Exchange (PSX) declined in market value by 9% from Rs32 billion to Rs28 billion during the second quarter (Oct to Dec) of the current Fiscal Year 2022-23, reports WealthPK. On average, the property sector reported a loss of Rs1,008,172,463 in 2QFY23.

PSX launched property as a separate sector for trading and transparency on August 10, 2022. Currently, the property sector constitutes three companies. Javedan Corporation Limited, with the market symbol of “JVDC”, is the largest company listed in the property sector.

JVDC has the highest market capitalisation of Rs18.3 billion among its peer companies. With a market cap of Rs8.9 billion, TPL Properties Limited (TPLP) is the second-largest company whereas Pace Pakistan Limited (PACE) is the third company having a market cap of Rs700 million.

PACE dropped its market value from Rs811 million to Rs725 million which is a percentage MV loss of 11%, during the second quarter of the Fiscal year 23.

TPLP remained the highest traded stock from the property sector during 2QFY23. The company added 88% of the trade activity in 2QFY23, on average. It also positioned itself as one of the top 10 traded symbols of PSX for the consecutive three months (Oct to Dec) of the Fiscal Year 22-23. It was the only firm from the property sector which marked its way to the top 10 symbol chart of PSX in 2QFY23. 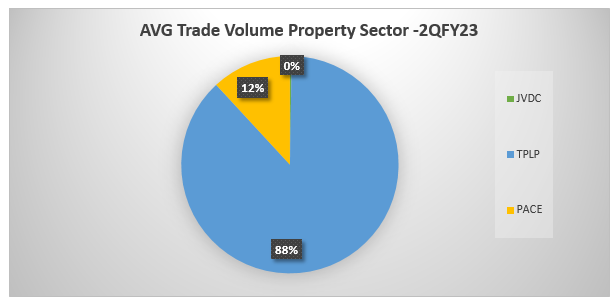 On average, PACE remained responsible for 12% of the trade activity exhibited by the property sector in 2QFY23. JVDC stocks traded the minimum for 43 days during the second quarter of the Fiscal 23. The trade volume did not make any significant appearance in the trade volume chart.