Port Qasim Electric Power Company Limited (PQEPCL) has taken the first step toward shifting 10% of the 1,320 MW plant from imported coal to local coal given rising costs and shortage of foreign exchange.

Power plants had been looking for cheaper alternatives to coal imports as a result of the surge in prices of imported coal and the scarcity of foreign exchange, the National Electric Power Regulatory Authority (NEPRA) said. 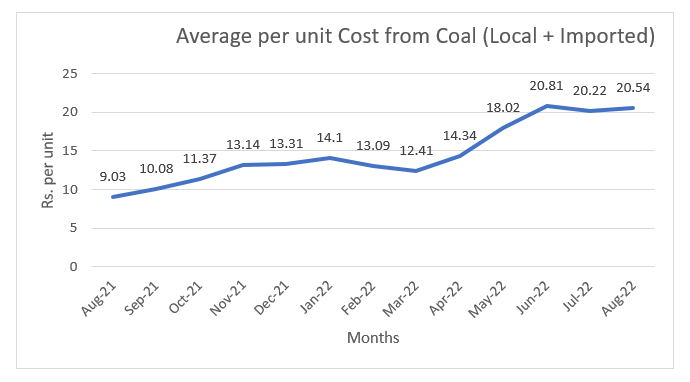 During the past year, coal had been among those commodities that had seen their prices surge several times. Since last year, the delivered price of South African coal had increased to $407 per ton from $177 per ton, an increase of 130%, NEPRA added.

According to NEPRA, the import of coal from Afghanistan was approved as long as the delivered price per Metric Million British Thermal Unit (MMBTU) of Afghanistan coal was lower than that of its existing coal imports, and that the payment was made in Pakistani rupees.

Despite that, there were some problems associated with Afghan coal. There was not enough capacity in the Afghan coal market to meet the current demand for power plants as it stands. Furthermore, there was no published price index for Afghanistan coal that was liquid, transparent, and closely reflected the market price.

Considering all these factors, a proposal was currently being considered for the conversion of imported coal-based power plants already set up in the country to Thar coal. The Private Power and Infrastructure Board (PPIB) was leading the process in that regard.

As per the initial findings of the PPIB, imported coal power plants could use Thar coal for a certain percentage of their energy requirements. That was without the need for any modifications in their power plants to use Thar coal.

Furthermore, PQEPCL agreed to conduct on-site testing as recommended by Fichtner, starting with a 10% blend and adjusting the final blend ratio based on the results of the actual testing. However, they did not view an increase in blending with a decreased load as a reasonable option at that point due to the shortage of electricity in Pakistan.

There have been indications from PQEPCL that Thar coal had a high sulfur content that could cause erosion of the boiler water wall pipe, the heating surface, the pre-heater for air in the boiler, and the ID fan, which consequently resulted in a shorter boiler service life. With the help of anti-corrosion measures and other modifications made to the system, it was possible to avoid that problem.