The Pakistan National Shipping Corporation (PNSC) showed an extraordinary growth in the first six months (July to Dec) of the ongoing Fiscal Year 2023 with a rise of 108% in its market value, reports WealthPK. Unfollowing the bearish market trend, which heavily impacted the individual economic sectors, the corporation’s market value increased from Rs6.4 billion to Rs13 billion by the half year end of FY23.

Pakistan National Shipping Corporation is listed in the transport sector on PSX and trades under the symbol of PNSC. With a market capitalisation of Rs14.4 billion, it is the third largest company in the transport sector. Established in 1979, PNSC is mainly involved in the shipping of dry and liquid cargos in the international market. It is a parent company of 19 subsidiaries which are mostly private limited companies

In the first quarter of FY23, the PNSC earned 43% market value from Rs6.4 billion to Rs9.2 billion. It sustained MV growth in the second quarter of FY23 by reporting a rise of 45% from Rs9.2 billion to Rs13 billion. In terms of profitability, the corporation earned hefty profits in 1QFY23. It made sales worth Rs14 billion, which was even more than the annual sales amount achieved in the last five fiscals except FY22.

The company earned net profits of worth Rs5.3 billion in 1QFY23 with a net profit ratio of 37.5% with handsome earnings per share value of Rs40.8. The financials for the second quarter (Oct to Dec) of the FY23 are yet to be shared by the corporation.

The company remained in profit from FY18 to FY22. However, FY22 was the year of the highest sales of Rs23 billion. The corporation also earned the gross profit of Rs8 billion which was the highest in the last five years. 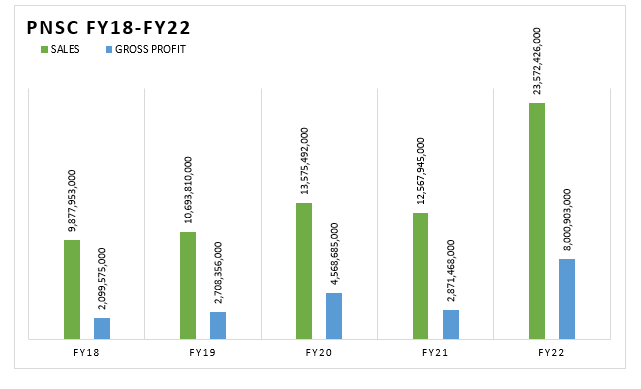 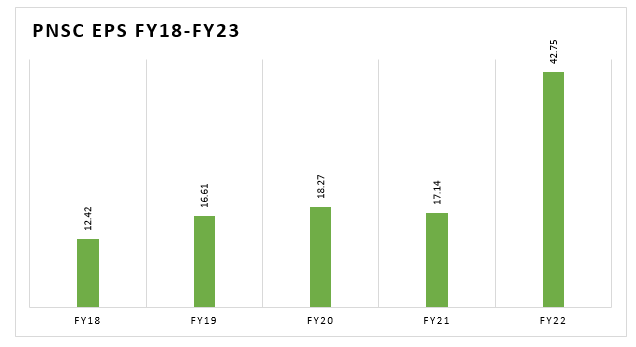 However, the earnings per share, an average of the last five fiscal years, was reported to be Rs21.44 per share.