Pakistan’s hand-engraved wooden furniture has been in high demand in the world market for decades, but some hurdles have restrained the country from taking full advantage of this huge market. According to the Pakistan Bureau of Statistics (PBS), furniture exports during the first six months of the fiscal year 2022-23 raised by 80.47% in comparison to the corresponding period of the last fiscal year (2021-22). 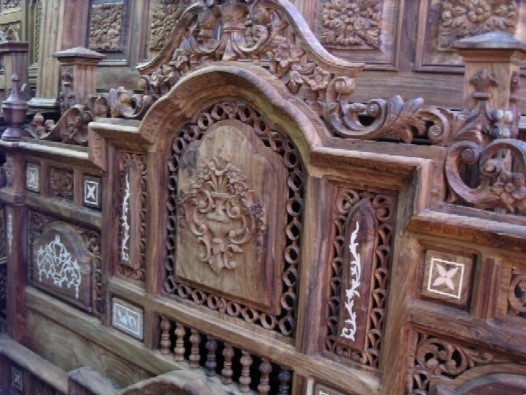 He said that the furniture sector needs government’s special incentives as this very sector has the potential to boost the foreign exchange for the country massively. He said the Trade Development Authority of Pakistan (TDAP) needs to organise expos to showcase Pakistan’s wooden engraved furniture to explore more markets for Pakistan’s furniture products.

Minister of State for Industries and Production Tasneem Ahmed Qureshi recently inaugurated the revival of the Furniture Division in Pakistan Industrial Development Corporation (PIDC), and also announced the completion of Sargodha Industrial Park at Lahore-Sargodha Road (in Punjab province), with the objectives of optimum utilisation of resources for development and promotion of industries in the country.

Chiniot, a city on banks of River Chenab, some 160km from Punjab’s capital city of Lahore, and at few kilometres distance from Sargodha Industrial Park, is recognised as a world-fame in view of wooden-engraved furniture and is a most sought-after destination for fancy and wooden engraved furniture sector nationally and internationally.

Chiniot, home to handmade wooden engraved furniture of Pakistan and fancy and wooden furniture known worldwide as ‘Çhinioti’ furniture, had been exported to the United States, Australia, France, UAE, and Saudi Arabia for decades. All over Pakistan, the demand for fancy and hand-carved furniture is mostly met by Chiniot and its craftsmen stationed in different cities of the country.

There are 500-600 furniture shops, and approximately 6,500 small and medium size workshops of furniture in Chiniot and estimated 60-65% population of the area is associated with furniture business directly or indirectly.

“Chiniot is home to fancy and hand-engraved furniture and fancy show-piece items,” said Shahjehan, owner of Chiniot Furniture Hub in the furniture city. He said that furniture sector has the potential to bring valuable foreign exchange, but this sector needs promotion and projection on part of the government through exhibitions and expos in Pakistan and abroad.

Despite huge potential, Pakistan’s share in the world furniture market is minimum and insignificant. A proper and effective marketing mechanism is needed by Pakistan to fully exploit this potential.

It has been noted that most furniture manufacturers are unaware of the importance of social compliance and environmental issues worldwide. Pakistan’s wooden furniture industry is scattered in rural areas, small towns and cities, and uses outdated machinery and manual labour which impedes its development. The industry can witness fast development with expansion and employing modern machinery.