Pakgen Power Limited’s market value rose by 25% during the Calendar Year 2022 (Jan 22 to Dec 22) despite market slump, reports WealthPK. The company reported a market value of Rs8.9 billion on the first day of trading in CY22 and Rs11 billion on the last trading day.

The company trades under the symbol of “PKGP” on PSX in the power generation and distribution sector. Established in 1995, the main activity of the company is to maintain a 365MW oil-based power station. With a market capitalisation of Rs10.8 billion, PKGP is the fourth largest company in the power generation and distribution sector. Bearing a market value loss during the first three quarters of CY22 consecutively, the company summed up a massive market value raise of 66% in the last quarter of trade from Oct 22 to Dec 22. 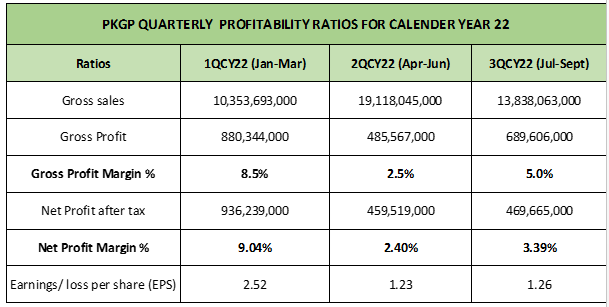 However, in comparison to the nine-month performance of CY21, the company raised its sales from Rs16 billion to Rs43 billion and the net profit ratio from 2.3% to 4.31% in 9MCY22.