Habib Rice Product Limited’s revenue from sales increased by 18% and stood at Rs533.7 million in the first quarter of the ongoing Financial Year 2022-23 (1QFY23) compared to Rs452.68 million in the corresponding period of the previous fiscal. The gross profit however decreased by 4% to Rs103.8 million in 1QFY23 from Rs108.2 million recorded in 1QFY22.

The company posted a net profit of Rs38.9 million in 1QFY23 from a profit of Rs21.4 million over the corresponding period of FY22, showing a positive growth of 82% year-on-year, reports WealthPK. 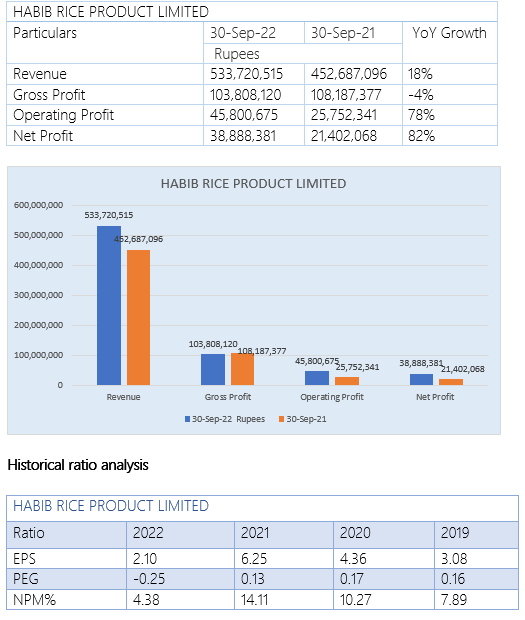 The company’s earnings per share demonstrated a positive growth in recent years. During FY19, the EPS was Rs3.08 which increased to Rs4.36 in FY20 and Rs6.25 in FY21. However, due to some major economic challenges, the EPS dropped to Rs2.1 in FY22. The Price Earning Growth (PEG) remained the same in recent years but decreased to -0.25 in FY22.

The net Profit margin also showed a steady growth in recent years. During FY19, the NPM was 7.89%, which increased to 10.27% in FY21 and 14.11% in FY22. However, the NPM also decreased in FY22 and stood at 4.38%. Throughout the course of FY22, the plant operations continued to deal with difficulties associated with inconsistent or unavailable energy (Gas, LPG, Furnace Oil, and KE), which, even when it was available, was in such limited supply that only the plant could be operated.

In addition, the price increase of this irregular energy occurred so quickly that the corporation was unable to pass it on to the customers. The runaway cost of energy, along with the knock-on effect it has had on other inputs, has led to a significant decrease in the company’s profitability. 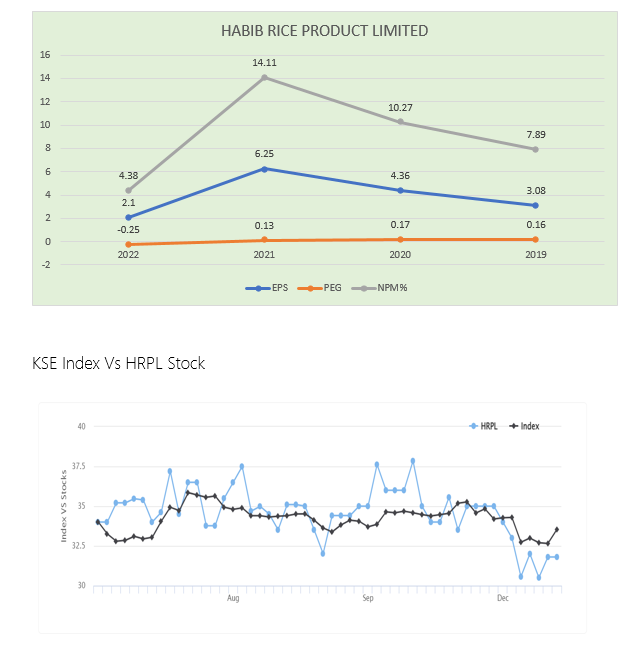 The performance of HRPL’s stock is now superior to that of the market average. Except for December when the HRPL stock was valued at a lower price than the index, the KSE Index has performed quite close to the average for the whole quarter, but the HRPL has performed better than the overall index.

Habib Rice Products Limited is a public company listed by shares, incorporated in Pakistan on July 10, 1980. The company is engaged in the production of rice-based starch sugar and proteins.