Reliance Cotton Spinning Mills Limited's net sales for the first quarter (July-Sept) of the current fiscal year 2022-23 stood nearly unchanged at Rs2.53 billion compared to the same period of the previous fiscal.The company saw a significant decline in sales growth and profitability in this quarter as a result of economic downturn and escalating costs, WealthPK reports, quoting the company's financial statistics. Reliance Cotton Spinning Mills was incorporated in Pakistan on June 13, 1990 as a public limited company under the Companies Ordinance, 1984 (now the Companies Act, 2017). The principal activity of the company is manufacturing and sale of yarn.

In the first quarter of FY23, the company reported a gross profit of Rs708 million, 25.3% lower than Rs812 million achieved during the same quarter of FY22. The company's net profitability also decreased by 27.1%, from Rs642 million in 1QFY22 to Rs468 million this year. Due to this loss, the company’s EPS decreased from Rs62.71 the prior year to Rs45.46 this year.

As of June 30, 2021, the company’s directors, the chief executive officer, their spouses and minor children owned 16.26% of its shares. Associated companies held 65.42% of shares, while NIT and ICP owned 4.52%. Modarabas and mutual funds possessed 12.94% of the shares. Banks, development financial institutions, insurance companies and joint stock companies held the rest of the shares.

Performance over the years

In 2021, the company's top line climbed to Rs7.68 billion from Rs5.98 billion in 2020 due to an increase in product demand. The increase in gross profit to Rs1.75 billion from Rs928 million the previous year was mostly attributable to growing demand and the economy's recovery following the lifting of the Covid-19-induced limitations. The net profit increased dramatically from Rs274 million to Rs1.19 billion. As a result, the EPS jumped from Rs26.24 to Rs116.55. 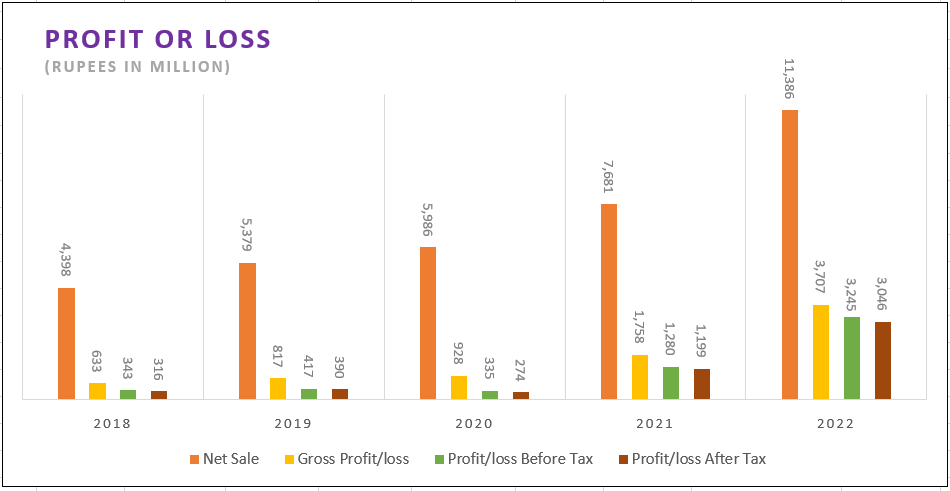