The aerial drone spray system has come as a huge relief to farmers, as it allows them to effectively spray less quantities of insecticides in less time over a larger area to save crops and boost production, reports WealthPK. 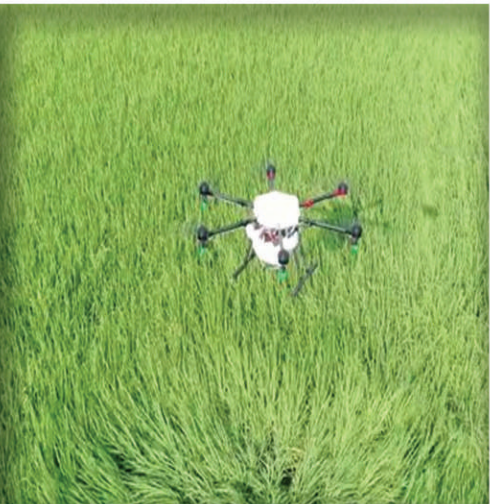 ‘’Crop production can be increased by using agrochemicals to control weed infestation; however, their excessive use adversely affects the human operators and environment (destroying the ecology). Aerial drone spray systems are used to carry out the necessary spraying, and this approach is said to be safer and more accurate than the traditional ones,’’ he said. Dr Shahzad said agricultural activities still required a lot of labour and time despite using innovative technologies for on-farm management. Using drone technology in agricultural operations, such as spraying, can simplify labour-intensive farming operations and make them more efficient, he added.

Drone technology is becoming more and more prevalent in the agriculture sector. From crop scouting to field mapping, drones assist the farmers, agronomists, crop insurers, and other interested parties in rapidly and effectively collecting and analysing data. Field activities like applying pesticides, fertilizers, irrigation, crop counting, and predicting crop output results in more informed decision-making. “Spraying with drones is still a new agricultural practice but it is gaining popularity. However, farmers have yet to widely adopt drones due to the lack of supply in the local markets and lack of skills at the local level.

Additionally, using the aerial drone spray systems for plant protection offers excellent operational efficiency and lack of worry about field-related restrictions like ground slope and resistance,’’ he said. Dr Shahzad said one or two persons could efficiently operate a drone for crop spraying, which was significantly safer due to the automated spray application and autonomous flying modes. The ability to spray crops in inaccessible locations is another advantage of deploying drones for agricultural spraying. Due to this feature, drone technology is being used for the first time to treat crops like sugarcane. He explained that drone technology has a maximum payload capacity of 12 kilograms per litre. With a delay-locked loop (DII) controller, a range of 7km is possible. Flight duration with a full payload of 15 minutes is sufficient to cover 2 acres in spraying.

Hardware can be modified and offers flexible payload possibilities to saves75% time and 80% water in manual and autonomous mission modes. ‘’The farmers allegedly stated that the use of drones has decreased the use of pesticides on their fields by 30%. Traditional agricultural equipment may have difficulty navigating some of the terrains in the region,’’ Dr Shahzad added. Decrease in biodiversity and the poisoning of aquatic life when chemicals flow into rivers after rain are just two examples of the environmental harm that excessive use of pesticides and fertilizers can have on the ecosystem. This enhanced efficiency may help assuage these concerns, he added.

Services exports increase by 2.77% in 6 months