According to the annual report released by the Pakistan Telecommunication Authority (PTA), the Special Communication Organisation (SCO) and Pakistan Telecommunication Company Limited (PTCL) have laid 5,375 kilometres of cable in Azad Jammu and Kashmir (AJK) and Gilgit-Baltistan (GB) in 2022, showing an increase of 1,510 kilometres, WealthPK reports. The authorities have awarded Telecom Infrastructure Provider and Telecom Tower Provider licences to seven companies in AJK and GB. The companies will lay optical fibre cable and erect towers for long-distance and international (LDI) connectivity. 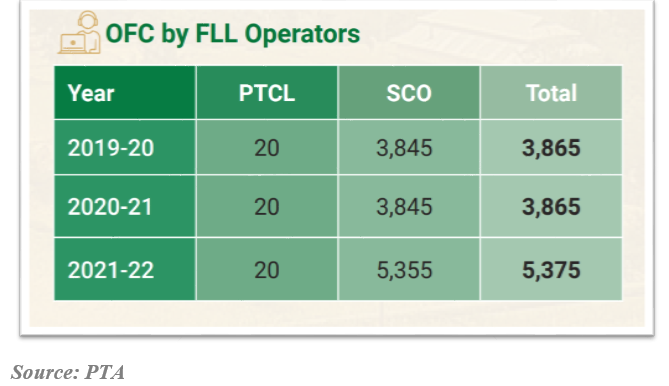 With the hiring of fiber to the home (FTTH) by SCO, triple-play services have been launched in nine major cities of AJK and GB. Work is also underway to connect 30 more cities in the region to the network. According to the report, 715 educational institutions and 340 hospitals and healthcare facilities across AJK and GB are digitally connected to serve residents of the region. More than 180 financial institutions are offering online banking and ATM services in AJK and GB.

Digital connectivity and 4G services are available at 130 tourist resorts, making it possible for visitors to enjoy high-speed broadband and stay connected with the world through the internet and other services.

SCO is working in AJK and Sust area of GB to ensure digital connectivity with neighbouring countries including China, Afghanistan, Iran and India. SCO has installed more than 52 base transceiver stations (BTS) along the Karakoram Highway (KKH) for uninterrupted communication.

The report says that 1,785 cell phone towers were set up across the region during the previous year, showing a growth of 6%. Of these, 449 are 3G and 1,053 are 4G-enabled sites. Telenor has 476 cell sites, the maximum in the region. Ufone and SCO added maximum cell sites to their networks during the previous year, registering a growth of 14% and 12%, respectively. Jazz and Zong have been consistently expanding their networks in the region over the years.

Five mobile operators are presently providing 2G, 3G, and 4G services in AJK and GB. With over 5.9 million subscribers, teledensity in the region stands at 105% compared to 89% in the rest of the country. More than 99% of the total teledensity comes from mobile penetration. Telenor is the leading operator in the region, with a maximum number of cellular subscribers, followed by SCO.

SCO provides the maximum network coverage in the rural and urban areas, covering almost 450 major cities, towns and villages. The cellular subscriber base has registered a steady increase with a 10% average growth over the last five years. The region currently has six million mobile subscribers.

AJK and GB have three key fixed line service providers including SCO, PTCL and Wateen to serve 54,807 subscribers. However, owing to the non-availability, inaccessibility of fixed networks and non-affordability of alternative mobile services, the subscriber base remained stagnant over the last two years, according to the report available with WealthPK.