The Pakistan Stock Market (PSX) commenced on a negative note this week owing to a delay in talks with the International Monetary Fund (IMF) for the ninth review and postponement of the scheduled visit of the Saudi crown prince to the country, WealthPK reports.

The Pakistani rupee also remained under pressure against the greenback and plummeted by Rs1.53 on a week-on-week basis to settle at Rs223.17.

Meanwhile, the large Scale Multi-Illuminant data reports a 0.4% dip in the first quarter of the current fiscal on a year-on-year basis. However, the removal of Pakistan from the UK’s High-Risk Third Countries cushioned the overall dip.

According to PSX data, foreigners buying totalled $2.06 million as compared to a net sell of $4.65 million in the last week.

The PSX witnessed positive sentiment on November 16 from investors following the announcement of inflows from a multilateral institution, driving the benchmark KSE-100 index upwards. The 100-index gained 186.90 points, a positive change of 0.44%, and closed at 42,983.75 points. 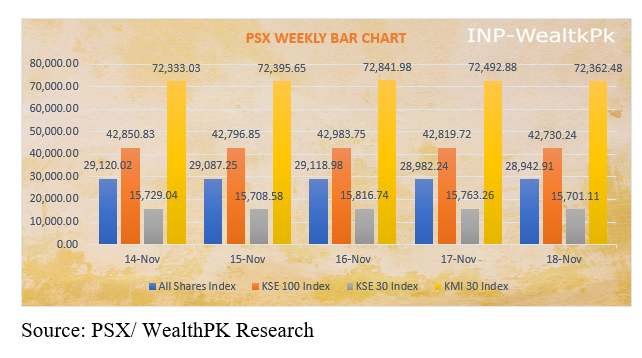 By selling its shares last week, the Foreign Investors Portfolio Investment (FIPI) made a profit of up to $2.06 million. Broker Proprietary Trading made the most money this week, selling their shares for $2.90 million, followed by Mutual Funds with $1.96 million and insurance companies with $1.57 million.

According to Muhammad Irfan, a financial analyst with Arif Habib Limited, key events to look out for include the monetary policy meeting scheduled for November 25.

“The meeting is likely to dictate the direction of the market, where we expect no change in the interest rates by the SBP. We expect the market to remain range bound in the upcoming week as the participants will remain vigilant owing to the political situation in the country,” he told WealthPK.